It’s been a week of reminiscing as I’ve been reminded of a lot fun memories that happened around this time of the year.

Two years ago, in a lot of ways spontaneously, my husband and I flew to Europe (Spain, Italy, and France). We ran Rock n Roll Madrid, Spain April, 27th as our first out of the country race. 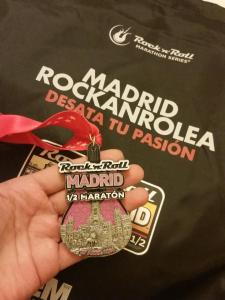 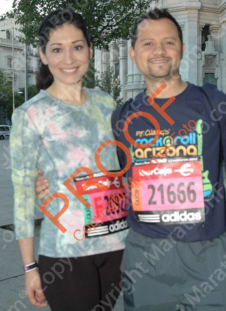 It was an absolute blast and super interesting to see how races are somewhere besides the States. I wrote about it here, but one of the funner tid bits was that there were no portapotties!! Or like, very few. I remember as a I ran, seeing dudes just pull up to the side and do their thing, lol!!

Another interesting note was that the water stations consisted of water bottles, not cups. It pained me a bit to see people take sips and then toss the bottles but then remembering how expensive bottled water was in Europe, I decided to hoard some and run double fisted.

There were no waves. As soon as the horn blew, everyone just went. There were corrals but I wasn’t sure the purpose if everyone started at the same time, lol! And boy, was it crowded! Oh , and it was vastly men running and my bib had a big fat “F” for female. 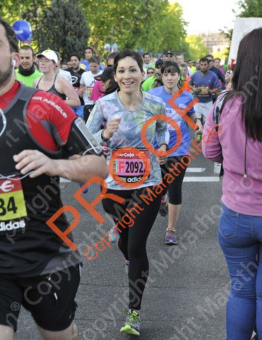 One of my fave race pics — having fun doing what I love (and in Spain!)

Anyway, Miranda @ThoughtsAndPavement commented on my recap that she’d run the race this year and reignited the fun times I had during the race and my time in Europe. She also noticed many of the same things, most especially how crowded the race was.

This weekend last year, I flew to Ohio, also sorta last minute, to see my brother run his FIRST half marathon. He had been training hard, and I was so proud of him. I said out loud to my husband after reading one my brother’s training runs (he texted them all to me ❤ ) how I wished I could be there to see him. My husband immediately got me a plane ticket.

I’ve written about my brother before and his amazing transformation. A total non-runner, overweight, sedentary but awesomely good guy. Last year, he lost over 60 pounds and completely changed his life. 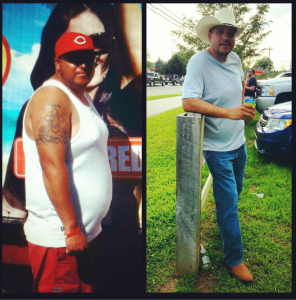 The Flying Pig Half Marathon last year was his first half, and he shocked the hell out of me by finishing in 2:10, smashing his sub 2:30 goal.

Me and the bro after his first half marathon

He ran a second half marathon later in the year with a lofty goal of snagging a sub 2 hour half. And you know what? He did it!!

Oh what fun to look back at such amazing memories. I sit here drinking coffee and typing and smiling…at how wonderful life is ❤

–What are some of your favorite running memories?

I don’t think I’ve mentioned it, or not a lot, that I have a race coming up. I use the term race loosely though, as I don’t really “race” trail races. The trail game is strong here in Arizona; I think the trail game is strong everywhere, lol! Those runners are a different breed! So I don’t go in with any expectations other than to have fun running where I love to the most, out in the middle of nowhere.

I love road running, too. But I think it’s easier to get bogged down by the numbers. Out on the trails, I always absentmindedly turn on my watch, mostly out of habit than anything else. Because out there, time doesn’t matter.

The cacti, the dirt, the purple mountains, the breeze, the wild—all of that matters. They don’t care about how fast you’re going.

On the road, everyone seems preoccupied by numbers. The cars zooming to their destination over the speed limit, the stoplight and its countdown blinking how long I have before I can cross, the people on their phones distracting themselves , tapping their steering wheel impatiently. And me, looking down at my watch, how long have I been running, how far have I gone…

Anyway, I’m looking forward to my race on Saturday. It’s a 27k out in the mountains closest to where I live, so it’s not too far, and it’s trails I’m familiar with. It’s at night with a start time of 7:30.

Here’s the course elevation (I learned from my first one to look at those things, lol):

It’s a 3 loop course of the 9k–I kinda like that because that means I’ll pass through the start, and the crowds, a few times. I have a ton of friends doing this race and I know that it’s just going to be a blast 🙂

More after the race!!

–Have you done a night race before? How’d you like it? (I’ve done 3– two trail and one road one in Canada!)

So yeah, I remember saying I’d never do one of these posts because well, I don’t cook and I don’t really have much to offer you guys.

However, yesterday, a friend of mine asked me what I was doing for lunch. I know she expected me to name off a take-out/drive-thru place (as that is usually what I do for 2/3 meals), but I surprised her by saying that I was making tuna. Then she surprised me by asking, “How do you make your tuna?”

So I decided to go out on a limb here and share it with you all too just in case anyone else would like a different spin on tuna. Or maybe you already make it the way I do. Which in that case, is the reason why we’re friends.

Okay, so here’s what you need. And bear with me because I have no idea how these WIAW posts are supposed to go.

2 cans of tuna (or however much you want–I typically use two, serves about 4)
3 hard boiled eggs (you can use just the whites if that’s your thing)
Pickles (preferably sliced b/c you’ll chop ’em)
Jalapeños (whole or pre-sliced, and from the can for easy chopping)

Step 1: Drain your tuna; put in medium size bowl
Step 2: On a cutting board, slice/chop your eggs (Leave only egg whites if that’s your preference. I used the whole egg). Pour the egg pieces in the tuna bowl.
Step 3: Chop one pickle slice (or more depending on how much pickle flavor you want)
Step 4: Chop your jalapeños (I use the entire small can. I like spicy.) 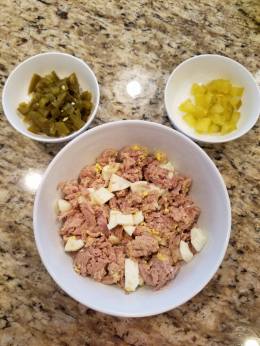 Step 5: Mix pickles and jalapeños in to the tuna bowl and you’re done!! 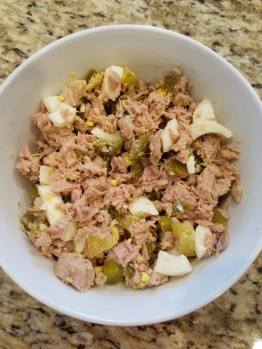 Some of my family members like putting in a spoonful of mayo, but I don’t. This is actually the healthiest Helly gets, lol!! You could also put in a little mustard but again, I like it just the way it is.

Eat straight from the bowl or–

Never thought I’d see the day, but there you have it! My first What I Ate Wednesday 😀 Whatdya think??

–Do you like tuna? How do you prepare it?