Well, I certainly relished my post-marathon BQ recovery, lol!! It was a nice rest, but at the same time my lack of running was because …I was a little sad…

But the post-marathon blues are for real, my friends. I had worked for this goal for a long time and now … nothing.

Of course, I knew I needed to rest after my big race. Yet, even after a couple of weeks of no running, getting back into the swing of things was rough. I’m big on plans, routine, consistency…and because I didn’t have anything to work towards, running for fun took a lot of effort.

I truly enjoy the training process. That, for me, is fun.

The post-marathon blues hit its peak two weekends ago when I was supposed to pace 2:00 at Phoenix’s Pride Run Half Marathon. I went to packet pick-up excited, thinking maybe this is what I needed to get back into the groove of things.

But because I had done very little running up to that point, I was really nervous. The night before, I half heartedly set out my gear on the kitchen table. When my alarm went off early the next morning, I wondered why…

I was out the door just after 5 a.m. (it was a super early start time of 6:30)–plenty of time for the drive to the race. But as I was going along the freeway mentally checking off the list, I realized I’d forgotten my bib on the kitchen table!! I had snagged the pace stick that was right next to it, but not the bib!! I debated going back or continuing to the race and seeing if I could find the race director or someone to help me. I finally decided to turn back thinking I’d banked enough time by having left early….I underestimated traffic and closures in downtown Phoenix however, and when I was close to the start, I wasn’t close enough with no parking around. I parked somewhere, anywhere (likely illegal) and thought maybe I could run to the start–but a mile in, I had no idea where I was…or where the start was…I walked back to my car, defeated, knowing I was about to DNS and let the race director and everyone else down.

I sulked for the next couple of days, wondering how I could get myself out of this funk I was in. I had another race, a 5k, the following weekend–one in which last year I PR’d. I knew that with my lack of running, bettering last year’s time was out of the question.

But it’s such a great race, and for such a great cause. The Diamondbacks Race Against Cancer is a 5k my two friends from high school promote in memory of their daughter who passed away from DIPG, a very rare form of cancer that currently has no cure. She would be the same age as my daughter.

So even if a PR was unlikely, I knew this race would be one that could lift my spirits up–I was running for Gianna.

Saturday found me with some of my Moms Run This Town friends and I was happy to have some of my favorite people around. I was excited, regardless of what the outcome might be. Ashley, my BQ training buddy was with me, and I knew I would try to hang on to her as long as I could. Unlike me, she had been running and was in much better post-marathon/post-BQ shape (having won a 5 miler the week before!). I knew I wouldn’t be able to hang on for long, but I loved having her there to push me.

Me and Ash twinning in red

And we were off!! I wasn’t sure what pace I would hold and went in with zero plan. I knew that I’d pretty much positive split the race and didn’t care. It felt good feeling the racing rush, the racing pain.

Second mile–7:04. I said good-bye to Ashley as she went on with her speedy self…

Third mile–7:13. I knew I had a PR chance if I pushed on this last mile and it took every ounce of will power to do it. I thought of Gianna’s parents–whose strength I admire so much. I hugged them at the start, but couldn’t bring myself to say anything…

Point one–6:01. A girl sped passed me just after the third mile and I had her within reach nearing the finish line. I knew I had a little left in me so I surged right passed her telling myself to make it hurt…

My last second surge somehow made it on T.V.

I couldn’t believe I PR’d!!! You know how people say they didn’t expect to do well in a race and you’re like…yeah right…

Well, honest to goodness, I had NO idea I’d be able to pull this off!! But beyond having beat last year’s time, I’m happy to feel again those feelings that make me want to run. 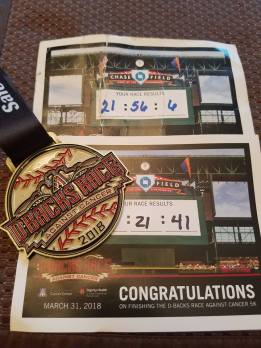 Last year and this year

Sometimes you need a race with ZERO expectations, and bunch of awesome friends, to get you back on your feet ❤ 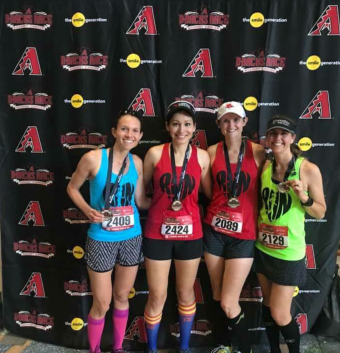 We all ran away with a PR!!

–Have you experienced the post-race blues?

–Is it easy for you to run with no training plan?

–How do you get yourself out of a running funk?